Le Marais ("The Marsh") is the historical center of Paris, where all of France's history began. It's the oldest part of the city and it is the closest you will get to the feel of medieval Paris and has more pre-revolutionary buildings and streets left intact than any other area in Paris. It was long the aristocratic district of Paris and it hosts many outstanding buildings of historic and architectural importance. After the revolution, much of the area was abandoned by the rich, and poor bohemian types moved in.

In 1240 the Order of the Temple built its fortified church just outside Paris's walls, in the northern part of the Marais. The Temple turned the district into an attractive area, and many religious institutions were built nearby: the des Blancs-Manteaux, de Sainte-Croix-de-la-Bretonnerie and des Carmes-Billettes convents, as well as the church of Sainte-Catherine-du-Val-des-Écoliers.
During the mid-13th century, Charles I of Anjou, King of Naples and Sicily, and brother of King Louis IX of France built his residence near the current n°7 rue de Sévigné. In 1361 the King Charles V built a mansion known as the Hôtel Saint-Pol in which the Royal Court settled during his reign as well as his son's.
From that time to the 17th century and especially after the Royal Square (Place Royale, current place des Vosges) was designed under King Henri IV in 1605, the Marais was the French nobility's favorite place of residence. French nobles built their urban mansions there such as the Hôtel de Sens, the Hôtel de Sully, the Hôtel de Beauvais, the Hôtel Carnavalet, the Hôtel de Guénégaud, and the Hôtel de Soubise.

It was the home of kings, of Napoleon, and the home of ideas of liberty. It was also the home of music and literature, home of Mozart and Victor Hugo.

The Marais spreads across parts of the 3rd and 4th arrondissements in Paris. There are many renowned museums within walking distance: Musée Carnavalet, Musée Picasso, Musée Cognac-Jay, Jewish Museum, the Archives Nationales and the Bibliothèque Historique de Paris.

The Marais nowadays is well known for its many trendy restaurants, fashion houses, hype galleries, design shops and is one of Paris' main localities for art galleries. It is now the home of the creative, design and fashion elite of the world.
The neighbourhood has experienced a growing gay presence since the 1980s and it contains a large portion of the gay population of Paris with many gay cafés, nightclubs, cabarets and shops. These establishments are mainly concentrated in the southwestern portion of the Marais, many on or near the streets Sainte-Croix de la Bretonnerie and rue des Archives.

We currently have 3 Marais rental apartments.
The apartments are listed alphabetically. 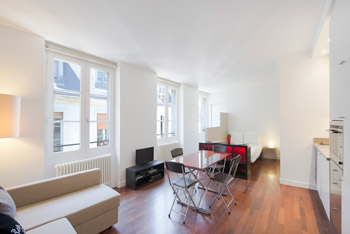 This is a new Paris Room Rental apartment which is well decorated in a modern style and suitable for everyone. It has all you need for holiday stay in Paris. With his perfect location in Paris' fourth district, it is perfect for discovering the charm of the French capital. 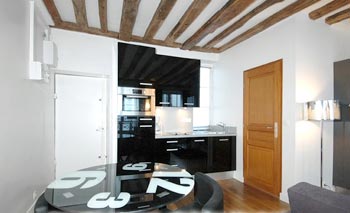 This bright, calm and comfortable 41 m² Paris rental flat sleeps 4 people and is located in the 3th district, in the heart of the Marais, probably the best place to live in Paris. A lively area, close to lots of museums, trendy boutiques and transport facilities. A perfect base for your Paris holiday! 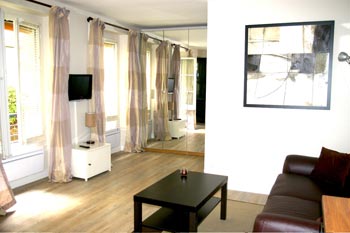 This brand new exceptional 32m² rental accommodation sleeps up to 5 people and is located in the 4th district of Paris, in the heart of the trendy Marais and in walking distance of Place des Vosges, Bastille, Centre Georges Pompidou, Notre Dame, Ile Saint-Louis and plenty different museums.

Get in Touch With Us